Couples cherish memories of their wedding day years after the big event. Jessica Mulroney, who now handles public relations, marketing and events for Kleinfeld Bridal at Hudson’s Bay and Ben Mulroney, anchor and producer of CTV’s etalk (and son of former Prime Minister Brian Mulroney), recollect their highlights. Today, they are parents to four-year-old twin sons Brian and John and one-year-old daughter Ivy, but recently, they took a stroll down wedding memory lane with Today’s Bride.

Their October, 2008 wedding – a three day affair, began with a private ceremony with 60 guests. The Thursday evening nuptials were followed by an intimate dinner with family and close friends. The celebrations continued the next day with a “Hallowedding”, described by Jessica as “an unforgettable costume party”, finally wrapping up the following day with a 350-guest reception. “Our guests are still talking about the food at our wedding,” says Jessica. “At the time, food stations were quite new. We had the most beautiful raw bar I have ever seen, as well as a meat station!”

Jessica’s favourite wedding memory: “It was the quiet times; dancing with my dad, talking to my mother and sister while getting ready and laughing with my brother. I especially remember being with Ben in the limo after the ceremony.”

Ben’s favourite wedding memory: “The moment I saw Jess walk down the aisle. It was the first time in my life that my breath actually left my body and I could not catch it.”

They both agree that “despite too much advice, we did it our way. Our main goal was to make sure our guests had fun.”

While the fairy-tale magic of the wedding has faded into day-to-day life, complete with diaper changes and job demands, marriage has so far met the Mulroneys’ realistic expectations. “To me,” says Jessica, “marriage is striving every day to be the best version of yourself possible, while being with someone who will love you at your worst.”

Originally published in the Spring/Summer 2015 issue of Today’s Bride Magazine.

Happy long weekend! Stop to smell the flowers and

If you look closely, you'll see that this wedding

Anyone else in the mood for something sweet? This

Amanda and Andrew got married during the height of 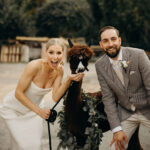 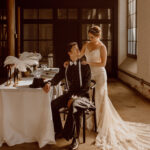 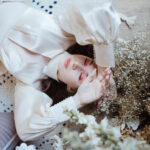 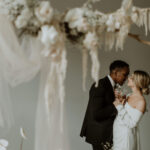 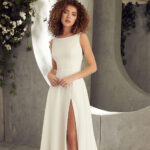